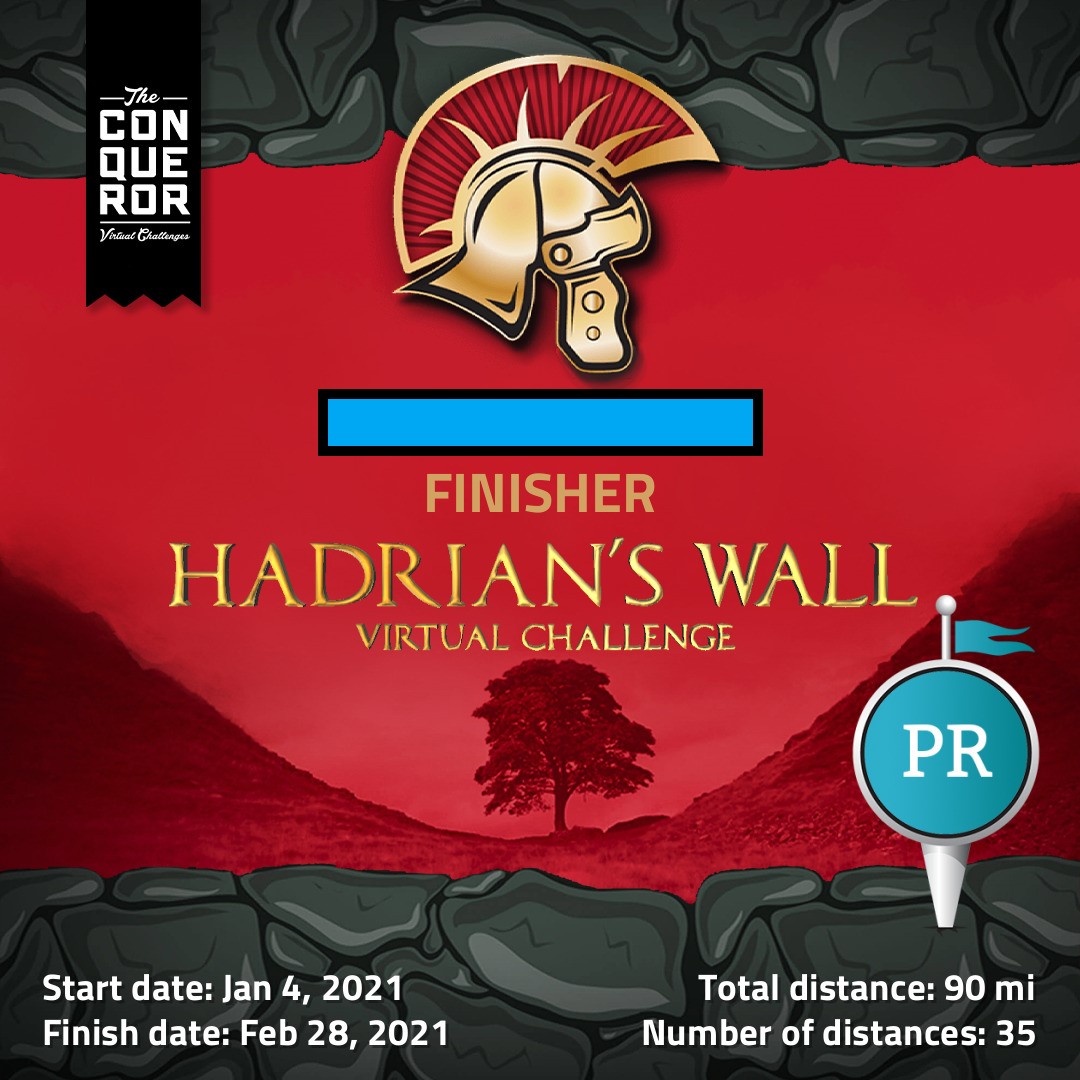 I finished my Hadrian’s Wall Virtual Walk this week! Since January 4th, my friend and I walked together at least 2 days a week, sometimes three, and then we walked on our own, whether I was walking the neighborhood or she was snowshoeing in a pristine forest, we got it done! We were pretty excited when we finished the last 2.8 miles and I could enter it on the app. There were some days when I wanted to count regular life walking but forced myself to only ‘walks’. When you say your going to do something out loud, the motivation to get it done is very strong – though no one but me really cared if I got to the finish line. I didn’t realize how happy I would be when we hit 90 miles, but I was so joyful.

You’ve reached the end of your journey at Bowness-on-Solway, a tiny village of 1,000 residents. Situated on a headland the village overlooks Solway Firth, which separates England and Scotland…….A humorous feature of St Michael’s Church which is located on the Bowness headland are its 2 bells that were stolen from the Scots as revenge for having its original bells taken by Scottish raiders in 1626. The church itself dates back to the 12th century and it was built by using the nearby Hadrian Wall’s sandstone. It continues to be an active church today…….To celebrate the completion of your journey have a rest at The Kings Arms Inn, a family run pub with home cooked meals. All along this virtual walk they’ve given descriptions and history of the area and I’ve watched Robson Green ( https://www.youtube.com/watch?v=8L9ulLxjxiw ) and a few others walk the actual wall so it’s been a great journey. Now I am going to google The Kings Arms Inn, look at their menu and make one of their items for a celebratory dinner.

Some days the walk takes longer because the view is amazing. This King Elder – which I learned from my walk a few weeks ago is a grebe – was swimming against the tide. I could relate to his struggle, nearly every day when we would head out for our walk I would have to talk myself into powering through and get going. The Ferry sailing by looks so serene, so quiet as it breaks through waters of Puget Sound. Now this seagull, he was not going to drop that flounder in fear we would decide it was what WE wanted for breakfast!

I decided a victory dinner of sorts was in order so after looking through the menu at the Kings Arm Inn I decided to try my hand at a Steak and Ale pie recipe. Using the instant pot made for a one pot meal up to when it came to the baking. I started with a beautiful boneless beef short rib from @https://www.westseattleswinery.com/ – because if I didn’t get my beef from my son and daughter in law, well no one wants a family feud and who am I to argue with organic, beautifully marbled ‘roast’? I know nothing about beer so went to a local market, https://www.pccmarkets.com/ and asked someone for help. They suggested an ale from Machine House Brewery called Totally Fuggled which was a dark beer that smelled so good. After searing the meat in the Instant Pot I added the liquids and put on manual for 20 minutes. Once the steam was released I added the vegetables and cooked for another 7 minutes. Perfection! I made both empanadas/mini pasty’s and pies in my ramekins. We had English Cheddar cheese and English Peas – didn’t mush them – as our sides. So, short story very long – I loved all aspects of the Hadrian’s Wall Virtual Challenge from beginning to end! Thank you CP for your support and being so much more then my walking buddy.