Friday has arrived – which means it’s time to put next weeks menu plan together and go to the grocery store and change my mind on the plan because what I want isn’t on sale!  So…. this week boneless chicken thighs are on sale so I will separate those two bulk packages into four and BOOM, there is Sunday, Monday, Wednesday and Thursday dinners.  Of course then it’s what to do with the chicken so it’s not the same meal every night.  Last weeks Cajun Chicken Cassoulet was so good I am going to make it again this week.  I will marinade chicken in pickle juice for Sunday’s fried chicken dinner.  Shredded chicken enchiladas with a side of jalapeño poppers for a night.  That leaves one more chicken dinner….. stir fry and brown rice?  Well – I didn’t have a game plan until I sat down to write and now done and done! 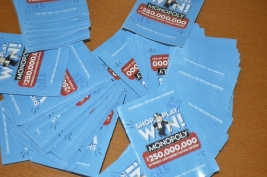 Safeway stores are having their Monopoly game right now.  I decided to put pride aside and when the person in front of me in line says no to the cashier when asked if they want tickets, I crunch up my face and say, “I’ll take them”.  I’m not sure I want to dig out the board and play the entire game but I like the ‘freebies’.  I’m putting the Shutterfly coupons away for the wedding.  I would like to have a few photos of the progression of their friendship to falling in love to getting engaged on display and with the free photo coupons, well, who doesn’t like a freebie (before shipping costs).  And I waited til after I shopped at Safeway so my gas discount would be at the highest before I filled up the car.

I made the mistake of going to Costco an hour after it opened on a Friday.  That parking lot, eeeegads.  I went straight to the back and parked near the gas station, while wishing I had put my fitbit back on this morning so I could have credit for the extra steps.  We had a diabetes insulin pen that was broken, before using, and they are too expensive to just say, ‘oh well, just toss it and use the other one’.  The pharmacist was great and while we worked together to try to figure out why it wasn’t working, they gave me a new one and they will deal with the manufacturer.  Very nice service.

So now I’m drinking my cup of coffee and sitting for a moment before I put the groceries away and look into those Tupperware containers with caution to see what is keepable, what can be tossed and what containers should just go straight into the garbage because – yuck!