I’m quoting the History Channel:  Mardi Gras is a tradition that dates back thousands of years to pagan celebrations of spring and fertility, including the raucous Roman festivals of Saturnalia and Lupercalia.
When Christianity arrived in Rome, religious leaders decided to incorporate these popular local traditions into the new faith, an easier task than abolishing them altogether. As a result, the excess and debauchery of the Mardi Gras season became a prelude to Lent, the 40 days of fasting and penance between Ash Wednesday and Easter Sunday.
Along with Christianity, Mardi Gras spread from Rome to other European countries, including France, Germany, Spain and England.The first American Mardi Gras took place on March 3, 1699, when French explorers Pierre Le Moyne d’Iberville and Sieur de Bienville landed near present-day New Orleans, Louisiana. They held a small celebration and dubbed their landing spot Point du Mardi Gras. 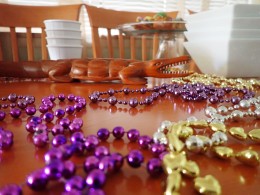 Well…. who doesn’t need a reason to have a party!   And what better way to celebrate then dig out some beads and find a few New Orleans’ recipes? 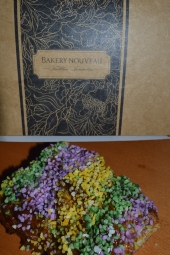 I wanted time to enjoy the cooking process so decided on Dimanche Gras instead of waiting for Mardis Gras.  First off I went to Bakery Nouveau to get two slices of King’s Baby Cake for us to share.  Then to the grocery store for a few ingredients I didn’t already have, like celery and another Walla Walla sweet onion (the only onion I cook with) and frozen okra. 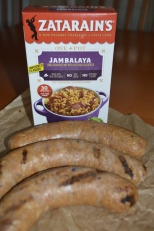 Then it was off to The Swinery to pick up three andouille sausage links hand made and put in the casings by Danny and Kim then smoked to perfection.  Zatarain’s boxed version of jambalaya is delicious.  I cut up chicken thighs and seasoned them with cajun spices, browned them  and added some sliced andouille, delicious!

I made fish stock for the first time by throwing the shrimp shells and tails into a pot of water and adding Cajun seasoning and giving it a nice boil then simmer.  Another first was making etouffee and using that stock for the base.  This was a low carb dish because I did not serve it on rice.  It did not need the rice and those that could dip a thick slice of olive bread in to absorb some of the goodness enjoyed those bites and those that couldn’t… well, he didn’t miss it because the meal was so rich and full of flavor on it’s own. 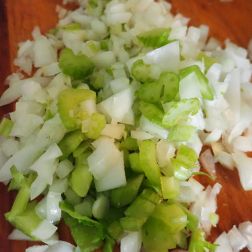 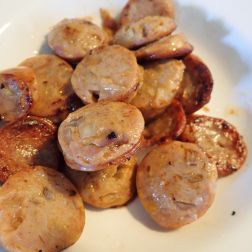 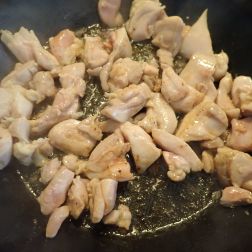 Kim makes a fierce Cassoulet that they sell at The Swinery, so when I saw the recipe for the Cajun Chicken Cassoulet I was a little apprehensive.  And I’ve NEVER cooked ocra before.   What a lovely dish, perfect for a cold, windy February night – and cannellini beans are high in fiber to subtract from the carbohydrates making for a reasonably diabetic friendly pot of goodness. 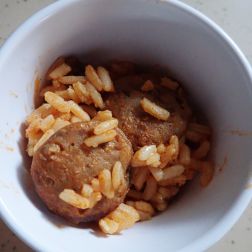 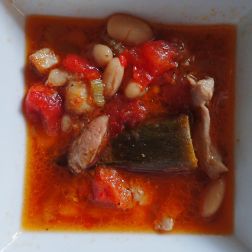 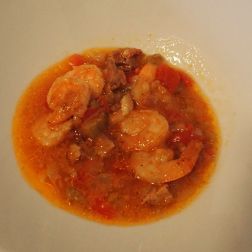 You know dinner is a success when no one is talking, the silence only broken for ohhhhhh and mmmmmmm.   (Still working on those close up shots and the lighting.)