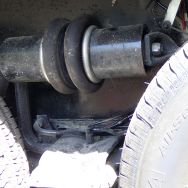 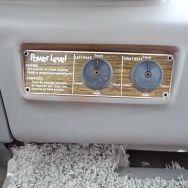 No, he didn’t trade in his ‘old bag’ for a new one, yeesh!  We got new air suspension bags for Christine, the 1975 GMC Eleganza II Motorhome.

After taking her for our first weekend, the fate of the bags a PO had installed was determined.  We had assumed we’d need to replace from the beginning but this short trip confirmed that decision.  The gentleman we bought Christine had told us there were problems with the bags and he still had the Sully bag plates stored under the refrigerator, which after a minute of research, we found was a great bonus.

A PO had installed a Hensley air bag system with Schrader valves. In addition he put a toggle switch in the cab to turn the air compressor on and off . The problem with a shut off valve is you never use the compressor, you are always keeping the bags full instead of allowing them to automatically level as you are driving.  There was also a leak in the system and it seemed instead of locating and repairing the leak he/she put a shut off valve at the bags.  We had previously replaced the air compressor with a VIAIR compressor as the old cylinder was full of water.   Some compressors need to have a vent to release condensation, this one either had a crack or the vents were possibly blocked, either way replacing the air compressor was essential.

Out with the old

As in many aspects of life, there are always various opinions of how things should be done.  Doing your own research and finding what works for you is what is important.  We fight the urge to be sheep, following the herd for no apparent reason beyond ‘this is what he did so it must be right’.  This has been our philosophy for the entire restomod – research and visualization of the final outcome.  In the case of the air bags, we knew we wanted the Sully air bags.   Oh, we needed a $1.19 bolt also.  The Sully air bag system has larger bags and three inches more movement, which is critical for front end alignment when you are driving.  Since we already had the plates we only had to order the two bags and found them for under $200 a pair.  Oh, we needed one $1.19 bolt also.

The replacement of the bags was surprisingly easy, finally a one afternoon project! Finding the leak was also remarkably easy, considering every project generally seems to open another kettle of fish.  We started at the dash controls, removed the knobs and panel, spraying some soapy water and  there was the leak!  A simple turn with an Allen wrench and the air leak is gone.  With full bags that hold air the only problem for me seems to be adjusting to the fact that the entry stair is a bit higher.  It’s been a week and we have had no leaking.

Of the four things we wanted to investigate and repair/adjust from our experience on this first trip, this first one is officially checked off! Hooray.